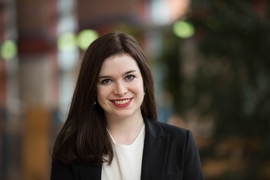 Diana Robinson is a PhD candidate in computer science at the University of Cambridge, specialising in human-computer interaction. Her focus is on interaction design of clinical decision support tools, looking at ways of representing and working with uncertainty in this context. Diana is also a Student Fellow at the Leverhulme Centre for the Future of Intelligence where she was previously a research assistant exploring ethical questions relating to AI in applications ranging from immigration to medicine.

Diana was a Visiting Scholar at the MIT Media Lab in the Opera of the Future group in 2017, working on the Philadelphia City Symphony. Prior to that, she worked as a Commodity Risk Analyst in BP’s Integrated Supply and Trading business. She was a Princeton Project 55 Fellow in 2012/13.

Diana holds an MBA from the Cambridge Judge Business School and a BA in philosophy from Princeton University.